I am not the first person in my family who has pursued a career in dentistry.

I’m sure you’ve gathered from previous posts that although I was born just west of London here in the UK, I am Arab – originally from Iraq.

Many of my family members have a medical/dental background. Both my parents are medical doctors, but I wanted to make this post to talk about my interesting dental family history.

Dentistry first pops up in my family tree with a man called Nasser, my great grandfather (on my mother’s side).

Nasser was (according to my mum) the first official dentist in Iraq! But before he officially became a dentist, he was working at a barbershop. Back in his day, when you would go to the barbers for a hair cut, you’d also get them to look at your teeth if you had any problems.

Imagine going to the barbers, sitting in the chair and when asked what you want, you say:

“Short back and sides please mate, grade 1, keep the top nice and long. Oh, and I’ve got a serious tooth ache – could you pull my tooth out too?”

I guess it makes some sense though in one respect for the two to be dealt with by a single practitioner since both are practical (hands on) and require good manual dexterity.

So anyway, the story goes that Nasser enjoyed fixing peoples teeth more than he liked cutting hair, so he dropped the hair cutting work to focus on teeth and opened a clinic for teeth in Baghdad. When working as a barber, people used to call him “Usta Nasser” – which translates as “Master Nasser” because he was a super talented barber. But he didn’t just transition into a dentist by trade, he travelled to Istanbul, Turkey where he formally trained as a dentist and then returned to Iraq as a qualified dental practitioner.

He soon established himself as the guy to go to if you had problems with your teeth and many others began following suit and began to train as dental professionals exclusively, he was a pioneer of the new wave of teeth specialists (dentists) in the country.

Nasser did not simply treat those who could afford the service, I’ve been well-informed that he would go to one of the main prisons in Baghdad once a week/month voluntarily and treat the prisoners locked up in there – sort of like his contribution to the community (social responsibility as we now call it).

Nasser had three sons: Mohammed, Ali and Hussein. Interestingly, I was named after Ali (my name is Ali Nasser FYI), and mum called one of my brothers Hussein, after her father.

Mohammed, the eldest of the three brothers was a medical doctor. He specialised as a chest physician – i.e. heart and lungs, because back in the early 20th Century there weren’t distinct specialties for cardiology and respiratory medicine as there are now. He travelled to the UK, where he did his specialty training at St George’s Hospital, London, before returning to Iraq where he practiced as a military physician for the Iraqi army. 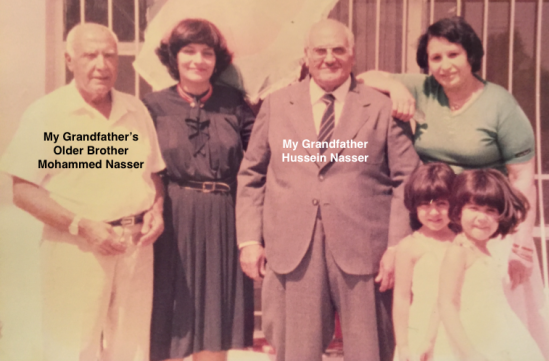 His younger brothers, Ali and Hussein (my grandfather) followed in their father’s footsteps and became dentists.

Unfortunately I never got to really know Hussein Nasser, my grandfather, as he passed when I was very young. So most of what I know about him is from stories I’ve been told from my mum, grandmother and others..

I could write lots of beautiful things I’ve been told about him, but I’ll keep it all relevant to dentistry:

When he was 17 years old, his dad (Nasser – my great grandfather) made it possible for him to travel to France where he started at dental school in Paris. What a brave man; he left his friends and family in Iraq to move to a foreign country with a hugely different culture and of course a totally different language to live alone and study dentistry!

Of course, most people don’t start at university until they are 18 years old, so it was a rather unique situation where he was able to start a year sooner (aged 17). It was possible for him to start his training early because he had grown up with a father who was a dentist, so he had already been exposed to a dental environment and was familiar with basic clinical techniques. So when he started at dental school in Paris, he was exempted from some of the first few basic clinical OSCEs in his first few years because he had already proved at his interview stage that he was more than competent in some operative dental aspects already! Very impressive 🙂

After a five years at dental school in Paris, he qualified as a dentist and returned to Iraq where he opened his own small practice on a busy street somewhere in the heart of Baghdad – it was on Al Rashid Street. He quickly established himself as one of the best dentists in Iraq, and was hugely successful. Within the local community he was a well known and well respected man.

Dentistry was different in his time to what it is like now.

Here’s one example I heard about that really highlights the difference:

He employed a full-time dental technician who had a separate technical room in the practice alongside him and would prepare any restorations/prosthetics for his patients right there. This practice model is still used today and is very effective for obvious reasons (you don’t have to send things off to a lab, the lab is where you work!)

What I find mad is that he would smoke cigarettes whilst operating in a patient’s mouth! Just imagine if you went to your dentist now, laid yourself back in the chair, the dentist starts to prepare your teeth for a crown/bridge etc, and then half way through the procedure stops for a cheeky cigarette break.

That’s an exaggeration in honesty; I doubt he would have smoked whilst operating! Terrible unprofessional, unhygienic and just WRONG, but it is true that he would smoke in the clinic between patients. If anyone did that in their workplace today, not just as a dentist, they’d be fired.

He also never wore gloves or went about the strict cross-infection prevention procedures we need to adhere to these days. Having said that, he of course used to ‘sterilise’ all his dental equipment between patients by boiling the instruments (not sure how effective that was at sterilising them but better than noting!) – these days we use professional autoclaves.

Dentistry treated him well, he became a very rich man and was able to live in a HUGE house in the city, treat himself to a new car every year, and go on lavish holidays multiple times a year. In fact, it’s not even a house, I have seen it myself when I went to Baghdad, it was two mansions side-by-side on one large plot of land that he owned. He had 5 daughters (one of whom is my darling mother) and treated them all like princesses growing up.

As I write this I realise it probably sounds ridiculous, but I think it’s a nice little family history that relates to dentistry so wanted to share it. I hope you don’t read this and think I’m bragging – I honestly just think it’s a nice but of history for the people I am a descendent of and of course it is very relevant to the path I have chosen for myself.

At home I have one of his old dental mirrors and will always keep it as a memory of him.

This man I have just described, my grandfather was called Hussein Nasser. Generally, the rule with Arabs is that your full name will be: [YOUR GIVEN FIRST NAME], surname = [FATHERS NAME].

Hence why his brothers were called Ali Nasser and Mohammed Nasser…

So as an example, if your dad is called Adam, and your name is Tony then your name would be Tony Adam. It’s funny and weird to think about it using English names so I guess it’s a good thing that’s just an Arab/Muslim tradition (I might be wrong).

The reverse also applies, sort of… an arab man can be referred to as the father of his eldest child. For example, I am the oldest sibling, so my father can be called Abu Ali (abu means the father of).

So taking the same example, if Tony was Adam’s eldest child, then he could be called Abu Tony.

My grandfather’s brother was Ali Nasser, also a dentist was an important figure in terms of dentistry in Iraq. He was the man who decided that there needed to be a dental school in Bagdad, Iraq so he went about opening starting the faculty of dentistry and the dental school at Baghdad University, in 1953. 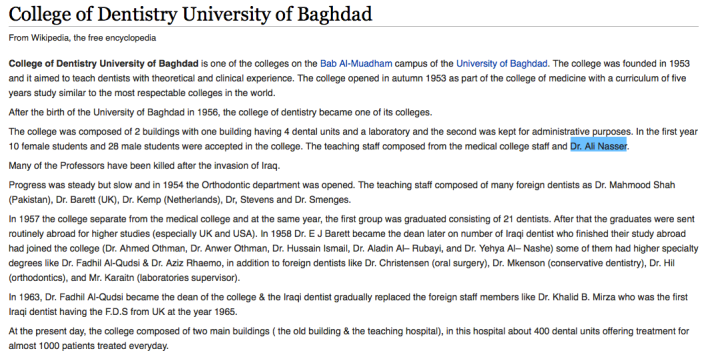 Before Ali Nasser, there was no dental school in Bagdad, he took on the gargantuan task of making it a thing. Dr Ali Nasser was the founder of the Dental Institute and he was also the first ever Dean of the Dental School.  He personally invited leading dental academics from countries all over the world to come and teach at the university. It still exists today and the thought that someone related to me accomplished such a great feat fills me with pride. Unfortunately though I never met him; he passed before I was born.

Dr Ali Nasser was one of the best respected dentists in Iraq at his time, so much so that he established himself as the dentist who looked after the Iraqi Royal Family (who still existed back in his time). After falling in love with a German lady (his second wife), he moved from Iraq and settled in Munich where he lived out the latter portion of his life with his new family (see picture below).

So that’s it for dentistry in my family, those three great men before me.

I never got to meet Nasser, or Ali, but I did travel to Iraq when I was a baby and then again as a toddler, so I did meet my grandfather twice, but unfortunately I was far too young to have any memory of those encountered. All I have to reminisce over are a few pictures.

They didn’t have hardly any part in my own personal decision to decide to pursue dentistry believe it or not but I am happy with the knowledge that I’ll be following in their footsteps.

That is all I wanted to share in this post. I hope you found it interesting to read! I certainly find it amazing to know of these men.

I’ll try to find some more pictures of them to add to this post.

3 thoughts on “My Family History in Dentistry”

I’ve been a DorkyDentalStudent since…